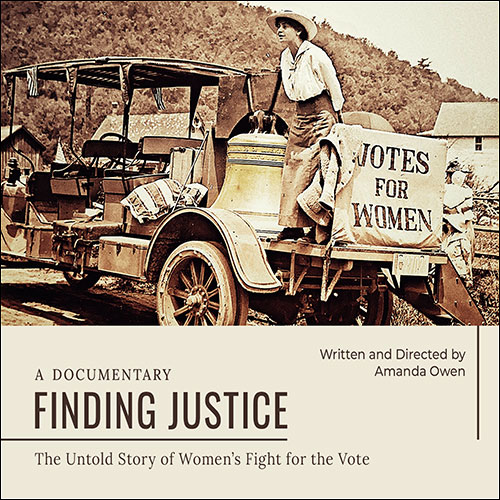 Finding Justice: The Untold Story of Women’s Fight for the Vote

| DVD INSTITUTIONAL | 19 MINUTES.
(Click Here to ask us about a license for public viewing for institutions, groups, and organizations.)

Wild West Women is pleased to announce the release of our co-production:  Finding Justice: The Untold Story of Women’s Fight for the Vote.

Part present-day detective story and part a historical account of the movement for voting rights, Finding Justice: The Untold Story of Women’s Fight for the Vote tells the story of a band of intrepid women and their one-ton bronze bell that became a celebrated icon of the women’s suffrage movement. The Justice Bell—modeled after the Liberty Bell—attracted nationwide attention, which helped rally support in the last crucial years leading up to the passage of the Nineteenth Amendment.

​As current struggles for gender equality and voting rights continue to make front-page news, this account of the suffragists’ courage and dogged persistence will inspire new generations in the fight for justice and equality.

Finding Justice premiered at the National Women’s History Museum on August 26, 2020 with a screening and panel discussion with Amanda Owen,  the filmmaker, and Rosie Rios, President Obama’s Treasurer. Since then, Finding Justice has aired on PBS (WQLN and WHYY) and for a number of institutions and organizations.

“Finding Justice is not only a film that inspires and empowers its viewers, it’s also an incredibly important documentary that shares a history that for far too long went uncovered. The film is a testament to the courage, tenacity, and resilience of the women who helped lead the charge to secure women’s suffrage, and while sharing the incredible journey of the Justice Bell, it speaks to the urgency of ensuring that women’s stories—like this one—aren’t left out of the history books.

I had the great pleasure of watching this film with my 11-year-old son, who is still trying to make sense of a time in our country’s history in which women weren’t allowed to vote. The film so expertly shows that democracy is still very much an experiment, and one that each citizen must actively participate in for it to thrive. It was profoundly moving to view this film with my son, who was just as inspired as I was by the story of the Justice Bell and of the women who stepped off the sidelines to make this country a better, more equal place.”
Jennifer Herrera, Vice President of External Affairs, National Women’s History Museum

“What an interesting story! The forgotten story of the Justice Bell affirms the importance of the campaign to win the vote for women as well as the ongoing need to document and honor women’s history.”
Susan Ware, author of Why They Marched: Untold Stories of the Women Who Fought for the Right to Vote

“Finding Justice: The Untold Story of Women’s Fight for the Vote will inspire every viewer as well as inform them about this remarkable chapter in American history, and what happened afterwards. New research and historical photographs bring the story alive and establish the Justice Bell as a singularly iconic symbol of women’s long drive for liberty, equality and justice.”
Robert P. J. Cooney, Jr., author of Winning the Vote: The Triumph of the American Woman Suffrage Movement

“Wow, I knew this would be good but I didn’t know it would be THIS good. Brava!! Finding Justice not only shines a light on untold stories from our history but also shows us how those histories are relevant to today’s call for equal justice for all.”
Lucienne Beard, former Executive Director, Alice Paul Institute

“Finding Justice tells the inspiring story of a forgotten grassroots movement of Pennsylvania women fighting to gain the right to vote. This film helps us learn and appreciate the history of the brave women who insisted on their full citizenship.”
Alison M. Parker, author of Articulating Rights: Nineteenth-century American Women on Race, Reform, and the State and Unceasing Militant: The Life of Mary Church Terrell