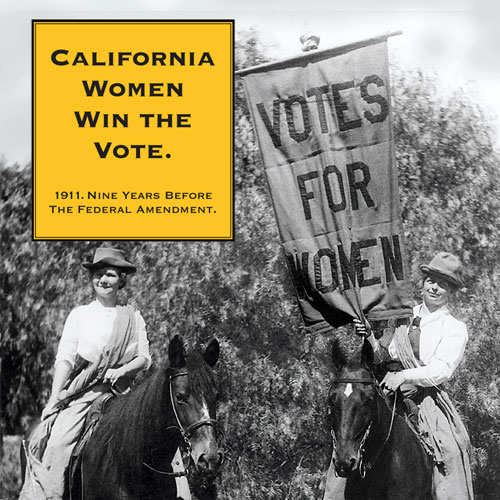 A Film by Martha Wheelock (2011)
Narrated by Bonnie Franklin

Using both historical materials and live reenactments, this film presents the dramatic Suffrage campaign that won the women of California the right to vote nine (9) years before the Federal Amendment. The campaign becomes a role model and motivation for the rest of the country; today, the tactics and spirit of these women are a guide and an inspiration for citizen activism in a democratic society

This film was the centerpiece for the state-wide celebration of California’s Centennial of Women’s Right to Vote in 2011. It reveals a close-in study of a State’s campaign strategies.

California Women Win the Vote is a terrific film, depicting not only the exciting 1911 campaign for full suffrage rights for California women but the larger, longer struggle in which it was a turning point. This is a gripping tale of audacity, courage and triumph. I loved it.

California Women Win the Vote vividly recreates of one of the major battle points in American history. Now, for the first time, we can experience the grand spirit of the woman suffrage movement and feel what it was like for its leaders, participants, and even opponents. Not only do the scenes in this wonderful film bring the bold state-wide campaign to life, but the film is also jam-packed with rare and telling imagery. The combination splendidly conveys the daunting challenges suffragists faced and the creative strategies they adopted to clinch their remarkable, come-from-behind victory.

Above all, Wild West Women’s celebration of what California suffragists achieved — against all odds — reminds us of the central role women have long played in U.S. history and in the expansion of American democracy.